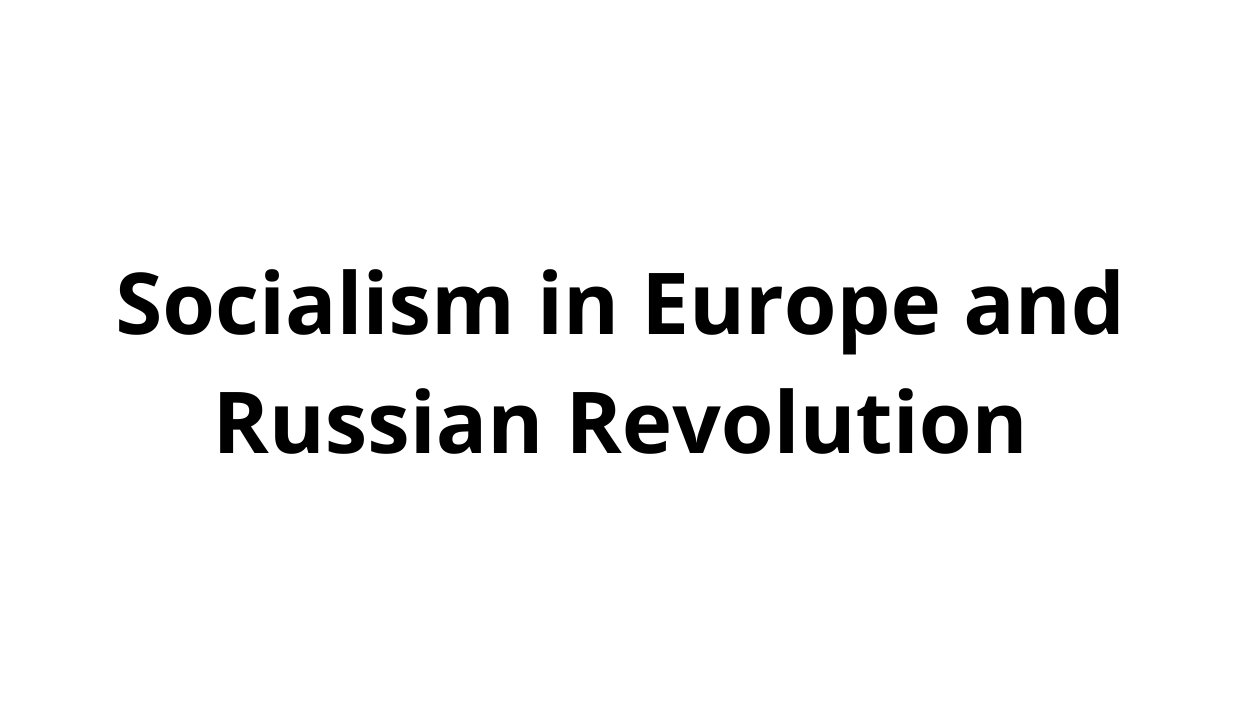 Q1). What were the social-economic and political conditions in Russia before 1905?

1. The vast majority of Russia’s people were agriculturists.

2. About 85% of the Russian Empire population earned their living from agriculture.

3. Russia was a major exporter of grain industry was found in pockets.

4. Craftsmen undertook much of the production.

1. Most industries were the private property of industrialists.

3. Factory Inspector could not prevent rules from being broken.

4. Accommodation surprised from Rooms to democratise.

1. Workers were a divided social group.

2. Workers were divided into skills.

3. workers consider themselves aristocrats among other workers.

6. But they were paid less than men.

7. Divisions among workers showed themself in dress and manners too.

Q2). In what way was the working population in Russia different from other countries in Europe before 1917?

(i) . Workers in England and Germany began farming Associates to the fight for better living and working conditions.

(ii) . They set up funds to help a member in a time of distress.

(iii) . They demanded a reduction of working hours and the right to vote.

(iv) . In Germany these associations worked closely with the social democratic party.

(v) . They helped it win permanently.

(vi) . Most industries was the private properties of the industrialist.

(viii) .  factory inspector could not prevent rules from being broken.

2. There were over 1 million casualties.

4. The destruction of crops and buildings left over 3 million refugees in Russia.

5. The situation discredited the government and tsar.

6. Soldiers did not wish to fight such a war.

7. The war also had a security impact on industries.

8. Industries were few suppliers of industrial goods by Germany.

9.   Railway line begins to break down.

10. Able blooded men work called up to the war.

Q4) . What were the main changes brought about by the Bolsheviks immediately after the October revolution?

What were the main changes reserved after the October revolution?

Ans- Most industries and banks were nationalized government took over ownership and management land was declared social property peasants were allowed to seize the land of nobility the partition of large houses according to the family requirement they Ban the use of old tiles of aristocracy new uniform design for the army and official bolshevik party was renamed the Russian Communist Party Russia became a one-party state Trade union work kept under party control.

Q5). Write a few lines to show what you known about -:

Ans- * Kulaks:-   party members toured the grain of areas their supervising enforced grain collection s collections and raiding ‘kulaks’. The name for well to do peasants.

* The Duma:- during the 1905 revolution the tsar allowed the creation of elected consultative Parliament or Duma.

* Women workers between 1900 and 1930:- women made 31% of the factory labour force by 1940. They were paid less than the man it was between half and three-quarters of main wages.

* The Liberals:- liberals wanted our nation which tolerated all regions liberal also opposed the uncontrolled power of dynastic rulers they wanted to safeguard the rights of individuals against the government they are good for representatives elected for the parliamentary government they did not believe in Universal adult franchise they felt a man of the property mainly should have the what they also did not want the vote for women.

Ans – The party forced all peasants to cultivate in collective farms. the bulk of the land and implement word transferred to the ownership of collective farms peasants worked on the land profit was shared. Those who resisted collectivisation were severely punished. Many words deported and exited rich peasants did not want to work in collective Farm for a variety of reasons. Stalin government allowed some independent cultivation treated search cultivators unsympathetically.