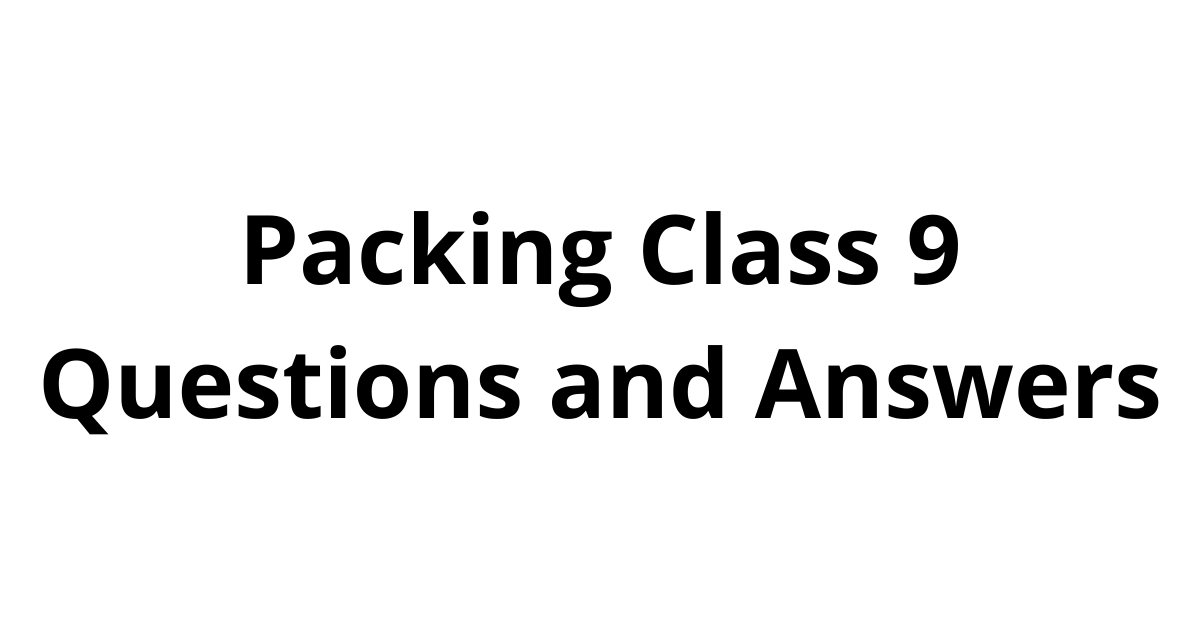 I. Discuss in pairs and answer these questions below in a short paragraph (30 – 40 words).

Q1. How many characters are there in a narrative? Name them. (don’t forget the dog!).

Ans: There are four characters in the narrative are:-

Q2. Why did the narrator volunteer to do the packing?

Q3. How did George and Harris react to this? Did Jerome like their reaction?

Ans:  George and Harris readily agree with the author’s suggestion so George spread himself over an easy chair and Harris his leg on the table. Jerome did not like their reaction because that was not intended for them to do the George and Harris.

Q4. What was Jerome’s real intention when he offered to pack?

Ans: Jerome’s real intention when he offered to pack was to two best over George and Harris.  he wanted to show his ability through the supervision and makeover of his order.

Q5. What did Harry use after the back was reset and strapped? Why do you think he waited till they to ask?

Ans:  After the bag was shut down Harish asked Jayram if he was not going to put the boots in the bag when the Harris is waiting till Jerome strapped the back just to make fun of him because Aaram considered himself the most skilled packer in the world.

Q6. What ‘horrible Idea’ occurred to George a little later?

Q7. Where did Jerome finally find the toothbrush?

Ans: Jerome finally found the toothbrush inside the boot.

Q8. Why did Jerome have to reopen the packed bag?

Q9. What did George and Harry offer to pack and Why?

Ans: George and Harris offered to fake the largest have for food because they thought that they should be wanting to start in less than 12 hours’ time.

II.  What does Jayram say was Montmorency’s ambition in life? What do you think a Montmorency and why?

Ans:  Jerome says that Montmorency’s ambition in life and forth is to get called.  he was very naughty.  he was always there and where to go.  does Montmorency was a perfect nuisance as a dog.

III.  Discuss in a group and answer the following questions in two-three paragraphs:

Q1. How did Montmorency ‘contribute’ to the package?

Ans: Montmorency contributes to the packing by making the confusion between Jerome, Harris, and George. When peoples throw things at Montmorency,  he enjoys it very much.  he was not a little dog he began to sniff at the food put his leg into the jam, and when the lemon is thrown from the hamper and begin tossing the lemon around assuming to be rats.

Q2. Of the three Jerome, George, and Harris what do you think is the best or worst packer?  Support your answer with details from the text.

Ans: Jerome, Georgen, and Harris had to prove that he is the most highly-skilled packer in the three worlds.  During this packing, a lot of troubles were caused by all three.  When Jerome says George, I say that you do the best packer in the whole world when both George and Harris handed over the entire work of packing to Jerome and George sits on the chair and Harris put his tires on the couch and sees this.

He got very angry because he wanted to show them both that he is the biggest packer in the world.  When Harris Food Hamper was made, he put the stoppage Montmorency and the stop spread throughout the bag.  And tell you one more thing that their dog was Montmorency splendour was mischievous.

He put his foot on Jam and then lemons jumped from inside the food hamper and he started circling behind Lemon because he was caught by a rat.  Looked like  We cannot say which is the world’s largest packer in the world, but we can say that all three suffered a lot of problems during packing.