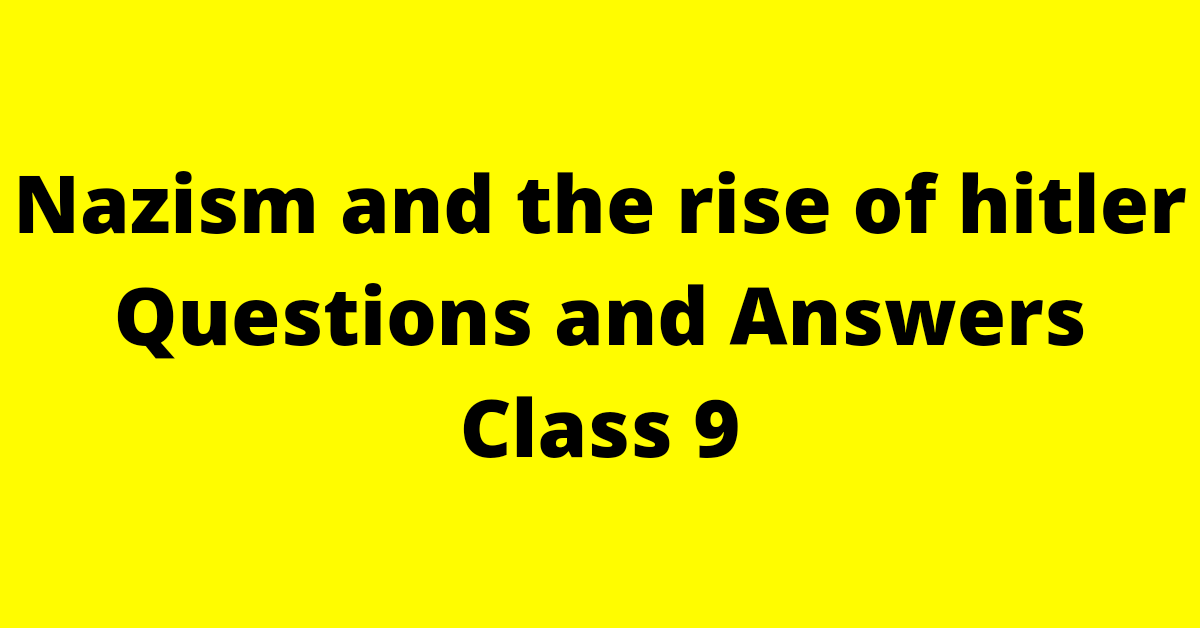 Q1). Describe the problems faced by the weimar Republic?

Ans- The problem faced by the weimar Republic were as mentioned below :

(i). Peace Treaty the words list as harsh and humiliating. Germany was forced pay compensation of 6 billion dollar.

(ii). The supporters of Republic socialist, democratic and catholics were called ‘November criminals’.

(iii). The economic crisis of 1923 made the situation worst as the prices rose very high.

(iv). During the Great Depression in (1929-30) German economy was again badly hit the number of unemployed by 6 million.

(v). Politically the republic was fragile.

Q2). Discuss why Nazim became popular in Germany by 1930?

Ans- Nazim became popular in Germany 1930 due to following reasons :

(i). The crisis in economy and society formed the background to Hitler’s rise to the power and popularity of Nazim.

(ii). The Nazim code not effectively mobilized popular support till the 1930’s.

(iii). Hitler was a powerful speaker his passion and his words moved peoples.

(iv). He promised to build a strong nation undo the injustice of the Versailles treaty.

(v). Hitler divides a new style of politics. he understood the significance of rituals and the red banner with the ‘swastika’.

Q3). What are the peculiar features of Nazi thinking?

The principles of Nazi are given in Hitler’s book ‘mein kamph’. their account is a under are-:

(i) . To save a nation, policy of war must be adopted.

(ii) . All the jews living anywhere in the World must be hated.

(iii) . The state is above all the power. should be visited in the state people exist for the state not state for the people.

(iv) . To extend the German empire and acquired all the colonies, snatched away from her.

(v) . To crush all type of party formation and opposition.

(vi) . The government should be directorial and anybody opposite to it should be default with firmly.

Q4). Explain why Nazi propaganda was effect in creating a hatred for jews?

Ans- (i) . Blaming the jews for Germany’s problems. Hitler and his Nazi begin persecuting them.

(ii) . Main jews were forced to live in ghettos and wear a yellow star to show that they were jews.

(iii) . Ever the following 7 years, 6 million jews and coloured people were sent to the construction camps.

(iv) . The Nazi believed that the Jews had received Christ.

Q5). Explain what role woman had in Nazi society?

Ans-The role of women had in Nazim are below-:

(i) . Boys were thought to be a aggressive , masculine and steel hearted girl was told that they had to become good methods and real pure blooded Aryans children’s.

(ii) . Girls had to maintain the purity of race distance themselves from jews looked after the home and teach their children Nazi values.

(iv) . There were given favourite treatment in hospitals and also entitled to concessions of in shops and on theatre tickets and railways fare.

(v) . To encourage women to produce many children owner crosses were awarded a bronze cross was given for children and silver for 6 and gold for 8 or more.

Q6). In what ways did the Nazi state seek to establish total control over its people?

Ans- (i) . the Nazi utilised the situation prevaling in Germany to their advantage and spread their influence. the social democratic party and the communist party in optive of the large follower failed to see eye to eye on common issues and they even felt to came together.

(ii) . The assassination of antenna ji leader was organised on a large scale.

(vi) . Youth organisation was made responsible for educating German youth in the spirit of national socialism at 14, all boys had to join nazi use organisation and Hitler youth. where they learn to worship to glorify aggression and violence condemn democracy etc.