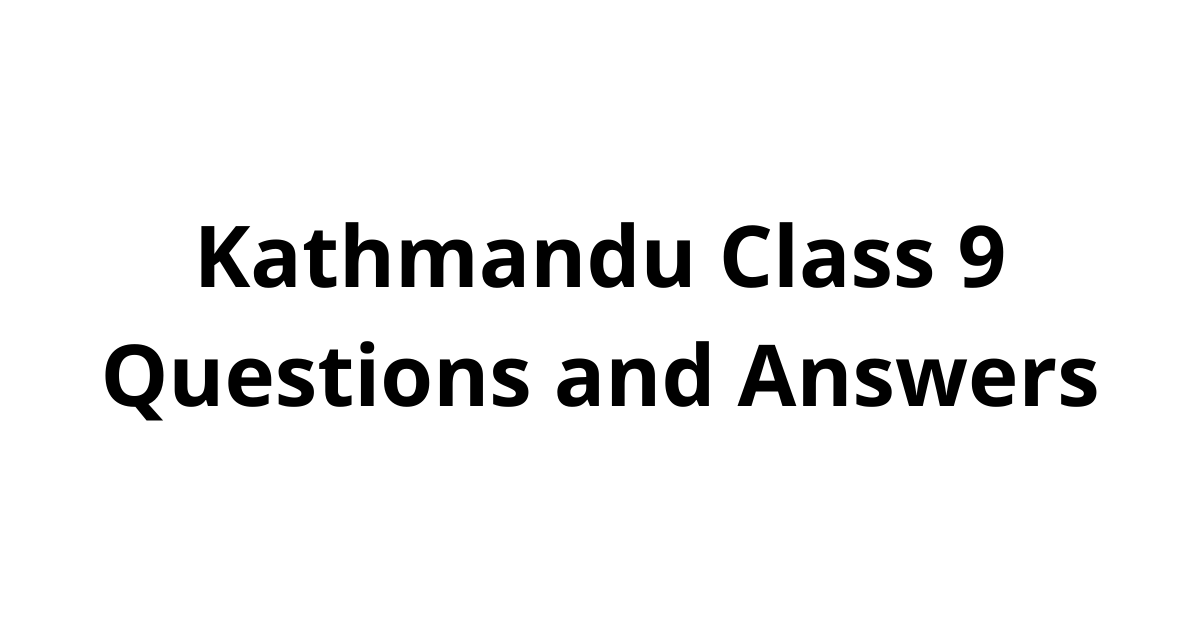 Q1. On the following map mark out the route, which the author thought of but did not take, to Delhi.

The route is shown by a dotted line.

He thought, he will travel:

Q2. Find out the possible routes (by rail, road, or air) from Kathmandu to New Delhi/ Mumbai/Kolkata/Chennai.

Some possible routes are:

Think about the text

I. Answer the following questions in one or two words or shorts phases:

1. Name the two temples the author visited in Kathmandu.

Ans: Pashupatinath and Buddhnath stupa in Kathmandu where the two temples author visited.

2. The writers say ‘All this I wish down with Coca-cola.’ What does ‘all this’ refers to?

Ans: Bar of marzifan, corn on the cob roasted wish down to with coco-cola.

3. What does Vikram Seth compare to the quills of a porcupine?

Ans: Vikram Seth the author notices a flute seller standing near the corner of the road. He takes the 50 to 60 bansuri protrude in all directions like the quills of a porcupine.

4. Name the five kinds of flutes.

II. Answer each of these questions in a short paragraph:

Q1.  What difference does the author note between the fruit seller and other hawkers?

Ans: The flute seller selects a flute from time to time and plays the flutes but other hawkers sell their product without discipline.

Q2. What is the belief at Pashupatinath about the end of Kaliyug?

Ans: The belief of Pashupatinath temple about the end of Kaliyug is that when the river Bhagmati fully emerges and the goddess inside will escape and the period of  Kalyug will end on earth.

Q3. The author has drawn powerful images and pictures. Pick out three examples each of:

(i) the atmosphere of ‘febrile confusion’ outside the temple of Pashupatinath (for example: some people trying to get the priest’s attention are elbowed aside…)

(ii) the things he sees

(iii) the sounds he hears

Ans: The author has drawn powerful images and pictures.

(i) the atmosphere of ‘febrile confusion’ outside the temple of Pashupatinath: The author describes the monkey’s fight very vividly. One Monkey 🐒 chases the other, who jumps onto a shiva linga, then runs screaming around the temples and down to the river. only Hindu’s are allowed in the temple. so, saffron-clad Westerners struggle for permission to enter the temple.

(ii) the things he sees : Princess of the Nepalese royal house. Everyone bows to her. vivid and prosperous culture of Kathmandu. busiest streets with fruit sellers and flute sellers.

(iii) the sounds he hears : film songs from the radios, car horns, bicycle bells, stray cows low and vendors shout out their wares.

III. Answer the following questions in not more than 100 – 150 words each:

Q1. Compare and contrast the atmosphere in and around the Baudhnath shrine with the Pashupatinath temple.

Ans: The atmosphere in and around the Baudhnath shrine a very peaceful. The Stupa is a haven of quietness in the buoy streets around but when the author described the Pashupatinath temple as very noisy because all the hawkers and other sellers sell their products to the people and visitors with a loud sound.

In the street of Pashupatinath temple, the rush and crowd of visitors are in large amount. In the Boudhanath stupa, any people of any religion go in the Baudhnath stupa but in the Pashupatinath temple only the Hindus are going and many other religions people request the temple guards to go inside the temple.

So, these are the few things that Compare the atmosphere in and around the Baudhnath shrine with the Pashupatinath temple.

Q2. How does the author describe Kathmandu’s busiest street?

Ans: The author says that Kathmandu is vivid and religious. Streets are narrow and busy. The streets are full of fruit sellers, flute sellers, hawkers of postcards, shops selling Western cosmetics, film rolls and chocolate; or copper utensils and Nepalese antiques.

The author also listens to the songs blare out from the radios, and car horns sound, bicycle bells ring, stray cows look at motorcycles, vendors shout out their wares.

Q3. “To hear any flute is to be drawn into the commonality of all mankind.” Why does the author say this?

Q1. Read the following sentences carefully to understand the meaning of the italicised phrases. Then match the phrasal verbs in column A with their meanings in column B.

Q1. Use the suffixes -ion or -tion to form nouns from the following verbs. Make the necessary changes in the spellings of the words.

Q2. Now fill in the blanks with suitable words from the ones that you have formed.

1. Mass literacy was possible only after the ………. of the printing machine.

2. Ramesh is unable to tackle the situation as he lacks…………

5. The children were almost fainting with …………. after being made to stand in the sun.

Ans: An arrogant lion was wandering through the jungle one day. He asked the tiger, “Who is stronger than you ?” “You, O! lion,” replied the tiger. “Who is more fierce than a leopard?” asked the lion. “You, sir,” replied the leopard. He marched up to an elephant and asked the same question. The elephant picked him up in his trunk, swung him in the air and threw him down. “Look”, said the lion, “there is no need to get mad just because you don’t know the answer.”

Q1. Study these sentences from the lesson.

• A fight breaks out between two monkeys

• Film songs blare out from the radios.

• I wash it down with Coca-Cola.

Now look at the following sentences

A small shrine half protrudes from the stone plation on the riverbank.

Small shops stand on the outer edge of the Stupa.

• The sun rises in the east.

• The earth revolves around the sun.

We can also refer to habitual actions using the simple present tense.

• He usually takes a train instead of a bus to work.

• We often get fine drizzles in winter.

In these sentences words like everyday, often, seldom, never every month. generally, usually, etc. may be used.

1. Fill in the blanks with the correct form of the verb in brackets.

(iii) Mahesh: We have to organise a class party for our teacher. …………. (Do) anyone play an instrument?

Q1. Discuss in class the shrines you have visited or know about. Speak about one of them.

Ans: Do it yourself.

Q2. Imagine you are giving an eyewitness account or a running commentary of one of the following:

1. a game of football, cricket or hockey, or some sports event

2. a parade (e.g. Republic Day) or some other national event

Speak a few sentences narrating what you see and hear. Use the simple present and the present continuous tenses. For example:

• He passes the ball but Ben gets in the
way…

• These brave soldiers guard our frontiers. They display their skills here

Ans: For self attempt.