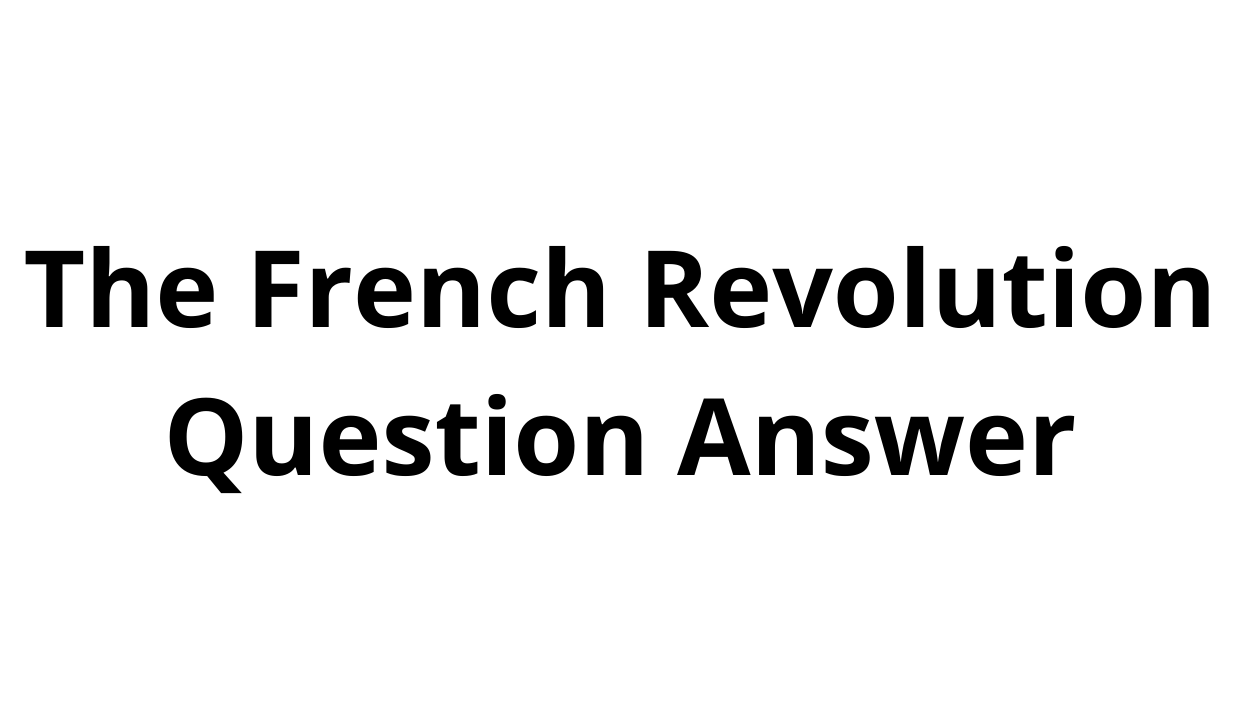 Q1). Describe the circumstances leading to the outbreak of revolutionary protest?

Ans- The circumstances leading to the outbreak of revolutionary protest in France work are -:

(i) . The new king found an empty treasury.

(ii) . Long years of war had drained the financial resources of France.

(iv) . the cost of maintaining an army the state was forced to increase taxes.

(v) . the French society was divided into three estates.

(vi) . Only the members of the third estates paid taxes.

(vii) . The members of first two were exemption from paying taxes to the estate.

(ix) . The church too extracted it’s share of taxes.

(x) . A number of indirect taxes which were lived on articles of consumption like salt or tobacco.

(xi) . Taxes was by the third estate alone.

(ii) . Groups which were forced to relinquish power are people of first estates (novel) people of the second estate (clergy).

Q3). Describe the legacy of the French Revolution for the people of the world during the nineteenth and twentieth century?

Ans- (i) . The ideas of Liberty and democratic rights were the most important Legacy of French Revolution.

(ii) . This friend from France to the rest of Europe during 19th century feudal systems were abolished.

(iii) . Colonised people reworked the idea freedom from bandage into their movements.

Q4). Draw up a list of Democratic right we enjoy today whose Origins could be traced to the French Revolution?

Ans- The rights which we enjoyed today are -:

(i) . Right to freedom of speech ( Express expression in assembly to form movement.

Q5). How would you explain the rise of Napoleon ?

Ans- (i) . After the falls off the Jacobin government allowed the weather is middle classes to seize power.

(ii) . A new constitution was introduced.

(iii) . Ended the vote to non-propertize section of society.

(iv) . It provided for two elected and legislative council.

(v) . This then appointed a directory executive made up of five members.

(vi) . This was meant as a safeguard against the concentration of power.

Q1). Who was the system of estates in French society organised?

Q2) . Do stance species excuse in France during old required?

(ii) . This lead to a rapid increase in the demand for food grains.

(iii) . Production of grain could not keep pace with the demand.

(iv) . So the price of bread which was the staple diet of the majority Rose rapidly.

(v) . Wedges did not keep pace with the rise in prices.

(vi) . so the gap between the poor and the rich widened.

(vii) . Whenever drought or hail reduce the harvest this lead to a substance crisis.

Q3). What lived to the emergence of the middle class of the 18th century?

Ans- (i) . Peasants and workers had participated in Revolt against increasing paid and food security.

(ii) . They lacked the mean and programs.

(iv) . They earned their wealth through and expanding over Seas trade from the manufacture of goods.

(iv) . There were either exported or brought any by richer member of society.

(v) . All of these were educated and believe that no group in society should be privileged by birth.

(vii) .These Ideas based on Freedom and equal laws.

Q4). Describe The circumstances that lead to tennis court oath ?

Ans- (i) . Louis XVI Called together and assembly of the estate general to pass proposal for new taxes.

(ii) . Voting in the estate general in the past had been conducted according to the principal of each state had one vote.

(iii) . But members of the third state that voting now be conducted by the Assembly as a whole.

(iv) .  Each member should have one vote.

(v) . When the king rejected this proposal member of the third estate walked out of the assembly in protest.

(vi) . They Declear them self on national assembly deposit Till they had drafted a constitution for France.

(vii) . It would limit the power of the  Monarch.

(viii) . He brought out a journal and delivered powerful speeches of the crowd assembled at Versailles.

Q5). Describe the event that led to grant of recognition to  national assembly ?

Ans-  (i) . The national assembly was busy at Versailles  drafting a constitution.

(ii) . The rest of France seethed with turmoil.

(iii) . A severe winter had meant a bad harvest.

(iv) . The price of bread Rose Baker exploited the situation and hoarded supplies.

(v) . After spending hours in long queues of the bakery. Crowds of angry woman stromed into the shops.

(vi) . The agitated crowd stromed and destroyed the Bastille.

(vii) . They looted grain and burnt down document containing record of Monerical dues.

(viii) . A large number of Nobel Fled from their homes.

(ix) . Many of them migrating to neighbouring countries.

Q6). Write a note on new constitution of France after monarch ?

Ans- (i) .  the national assembly completed the draft of the constitution in 1791.

(ii) .  Its main object was to limit the powers of monarchs.

(iii) .  These powers of the Legislature, executive and Judiciary This made France constitutional monarchy.

(ii) . Citizen voted for a group of electors.

(iii) . Not all citizen had right to vote.

(iv) . Only men above 25 years of age who paid taxes were given the status to active citizen.

(v) .  the remaining men and all women were classed as passive citizen.

Q8). What were the significance of political symbol ?

● The eye within a triangle radiating light shows knowledge.

● Red phrygian cap worm by a slove upon becoming free.

● Winged woman personification of the laws.

● Law tablet all and all are equal before it.

Q9). What was revolutionary wars and it’s effect ?

Ans-(i) . Although Louis XVI had signed the constitution.

(ii) . He entered into secret negotiations with the king of perrsia.

(iii) . They plans to send troops to put down the events.

(vi) . Before this could happen, the national assembly declare war against preesia and Austria.

(i) . Losses And economical difficulties to the people.

(ii) . The men were away fighting at the front.

(iii) . Women were left to the cupe with the task of earning.

(iv) .  A living and looking after their families.

Q10). What Led to the formation of a Jacobin club? who was its member ? what they were achievements?

Ans- (i) . The member of jacobin club belong manily to the less prosperous section of society.

(iii) . Many were not satisfied with them.

(iv) .  This lead to the formation of jacobin club.

(v) . Election were held from man 21 years and above have got the right to vote.